Welcome! Would you like to try some Wild Cherry Limeade? Sounds like an awesome drink, doesn't it? Well, in this case, it's the title of my latest quilt! 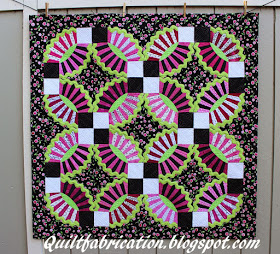 Wild isn't it? My husband wonders what I was drinking when I thought this up--I'll just say that there was almost Sangria in the title!

Started back in June, the project moved to the front of the list in October. Made from the Chic Kisses pattern from Sew Kind of Wonderful, I put my own spin of ric rac on it, approximately 11 yards. 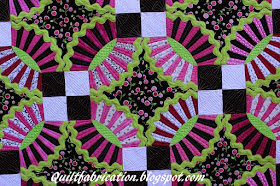 As for the ric rac, it was first stitched through the center to the curves of the blocks, with the ends to go in the seam allowances. After the top was assembled and the quilting done, the curvy edges were stitched down so that the ric rac would stay flat and not fold over. The jumbo ric rac was just too wide to let it be free. 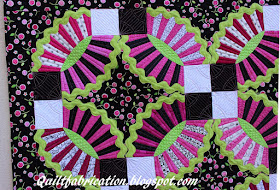 And of course, quilting detail. An open stipple in the black background, avoiding the cherry print; straight lines in wedges; figure eights in the green centers; and the pretty four patch design, complete with cherries and lime wedges. 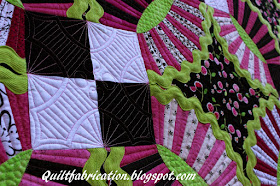 Last week, I gave a tutorial on stitching the four patch design. There are lots of variations possible within the basic framework--just change the fill, and it's totally different.

And love those cherries! 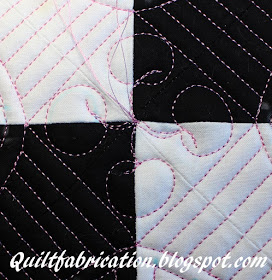 How to stitch those are also on the same tutorial. Love em'!

And what quilt wouldn't be complete without a peek at the backside? 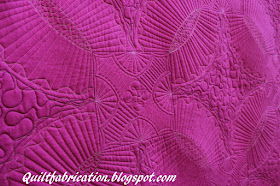 Yes, I was brave and used a solid pink to go with the front. Shows off all that pretty quilting! Now to make a label, and attach a sleeve, and up on a hanging rod it goes.