The wait is over! Time to show off Patchwork Suburb! 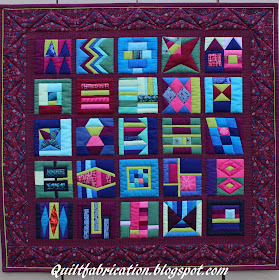 Isn't it awesome? This one goes on to my all-time favorite list!

I'd like to thank all of you for sticking with me on the parade of blocks over the last three months. It's been a long road, but a fun one! But why finish early? Because a November 30 entry deadline to QuiltCon was looming. I have high hopes that this one will be selected, but more on that another day.

Why the name? Determined a long time ago because of the size of the blocks. They're more of a suburb than a city! Thus, Patchwork Suburb.

On to the quilting. Stitch-in-the-ditch is around the outside of every block using a thin, medium grey thread called Seralene by Mettler. Probably should have used invisible thread, but I'm not a huge fan, as I don't like the shine. And, I had breakage issues once quilted. I'll probably get marked down for that by the judges, but it's my choice. As for the inside of the blocks, each was selectively stitched-in-the-ditch, meaning not every seam was stitched. 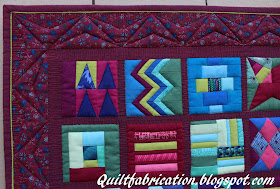 In the photo, you can see that the blocks have dimension to them, an extra bit of puffiness. For batting, I laid down a thin, but dense poly, with an 80/20 layer on top. The combo makes for a nice bit of definition.

I know that some would be tempted to quilt densely in parts of the block to make the areas pop, or to quilt pretty designs for added interest. But because of the size of these blocks, and without a common background fabric in each block like that in Dear Jane quilts, I decided that those styles were just not going to work on this quilt. 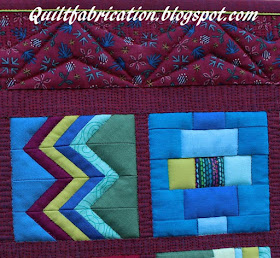 Instead, I opted to densely quilt the 3/8" sashing and the 3/4" inner border with closely spaced lines, which sets the blocks off nicely. And the outer border? That was inspired by Angela Walter's Dot-to-Dot border design in her Shape by Shape (affiliate link) book. The final touch is the repeat of the close lines on the very edge. That ties it all together, and gives the border terrific definition without distracting from the rest of the quilt.

And let's not forget the binding!

I wanted that bright green somewhere in the border, because of the theme of green and one print in all of the blocks. Green thread as a quilting fill was considered, but just wasn't right. I finally decided on a very thin piped binding. As in 1/16 of an inch. It just depended on how narrow I pressed it. That thin little bit adds just the right amount! And in case you're wondering, the sashing, inner border, and binding are a plum/blue shot cotton -- I used all of it!